Water from the Sibyllenquelle (Sibyllen spring) naturally regulates the circulation, has a balancing effect on blood pressure, improves the blood flow and counteracts physical and mental strain.

Baths at the Sibyllenquelle (Sibyllen spring) are prescribed both in the single tub (100 % carbon dioxide spa water) and with a concentration of 30-70 % in the spa water bathing section.

Carbon dioxide mineral baths can be prescribed – like radon baths – with additional oxygen inhalation. The oxygen is absorbed by the brain, heart muscle and leg muscles and performance is increased in these areas.

The body is heated up in the exercise pool and the elasticity of the connective tissue, especially close to joints, is increased, the blood flow is improved and the muscles are relaxed.

Movement therapy in the spa water is particularly important in the Sibyllenbad – as controlled self-treatment, as group sessions or as an individualexercise in the exercise pool in the course of which the therapist works together with the patient in the spa water.

Drinking fountain in the basement

In the basement of the Kurmittelhaus, guests can help themselves free of charge at the drinking fountain with carbon dioxide spa water from the Sibyllenquelle (Sibyllen spring). 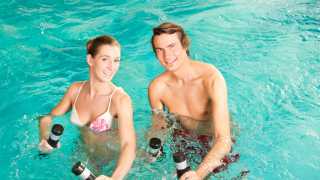 Free health courses in the Sibyllenbad

You can take part in the following free health courses in the bathing section: Aquarobic Wednesday and Friday 19.00 h… 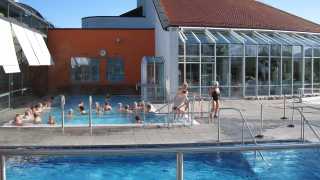 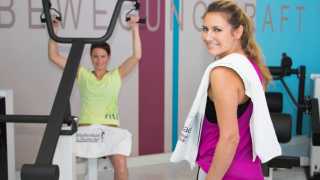 The Synchro-Circuit by SCHNELL is completely new: a whole-body training where the fitness devices adjust to your personal values such…

You have questions about our services?
The guest service is waiting for you.